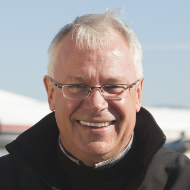 Jeff joined Conair in the spring of 2013 after a 36 year career with the British Columbia Forest Service, all in the forest fire domain, with 26 years specifically in airtanker operations. Jeff was the head of British Columbia’s Airtanker Program from 1996 to 2013.

Jeff led a team of fire professionals in developing what is now considered a benchmark centralized airtanker program. The cornerstone of this program was a state-of-the-art computer-aided dispatch system that enabled strategic and measurable tactical operations for an airtanker fleet. As a result of his work, and on behalf of his team, Jeff accepted the Aviation Space Technology Laurel Award for Operations in 2004.

Jeff considers himself fortunate to have worked with numerous firefighting agencies and their dedicated staff around the world. Jeff’s work-related travels for speaking engagements and fire management consultations have taken him from coast to coast in Canada, to the Northern U.S., Malaysia, Brazil, Greece, Australia and France.